Winners of the Citizen and Young Citizen of Honour Awards 2014 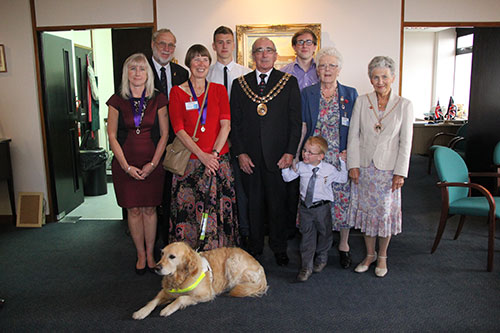 Linda runs a club for visually impaired people and works tirelessly to help members make their lives easier, despite being visually impaired herself.  She attends as many CAT meetings as possible to gain information with what is going on in the community and shares it with others, as well as putting forward the needs of the visually impaired.

Les drives for several voluntary groups, runs the swimming section of Fareham and District Sports Association for the Disabled and never says no to anyone needing a helping hand.

Maria works full time but also does a huge amount of voluntary work having been a Guide leader for 20 years and is now a Scout Leader for 1st Sarisbury Beavers. She is also Vice Chairman for Sarisbury Junior School Parents and Friends Association and is the Manager for Warsash Wasps under 11s football team.

Callum volunteered to help run a charity event to raise money for local charities Naomi House and KIDS. He was elected as group president by the other students and helped on the day with decorating, setting up stalls and welcoming visitors including the Mayor of Fareham.

Brandon is heavily involved in music, and he regularly supports work in and out of school. He also supports fundraising performances in the community and is about to start teaching on the adult education programme at Portchester, having already tutored in Cape Town, South Africa and Kolkata in India.

Harvey was born with Spastic Diplegia Cerebral Palsy and travelled to the USA for a life-changing operation, which has allowed him to learn how to walk. He has coped with his condition with immense determination, enthusiasm, and with a tremendous sense of humour, despite continuing to undergo extensive and protracted physiotherapy.