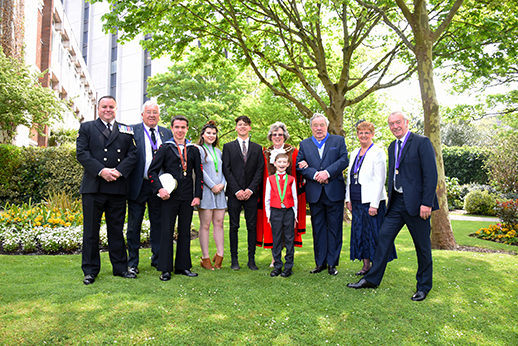 Winners of the Citizen and Young Citizen of Honour Awards 2016

Joseph wanted to help children who couldn't do all of the things he can do. He visited the Rainbow Centre to see how they spend their time and to meet some of the children who go there. On his eighth birthday, Joseph decided to abseil down Fareham Fire Station, raising lots of money for the Centre to help his friends that he met there.

Caitlyn had to act quickly when she saw an elderly man had fallen in the road and was bleeding badly. Caitlyn made the man as comfortable as possible, called an ambulance and his family, and caught his dog that was running into the road. She waited with the man until further help arrived, potentially saving his life.

Seventy eight year old, Ken is Chairman of the Titchfield Lunch Club and runs the Warsash Lunch Club. He regularly cooks for both clubs, takes people to hospital appointments, does their shopping and generally gives a helping hand to anyone that needs it.

Stewart is well loved and respected within the swimming community, having been connected with Fareham Nomads Swimming Club for over 35 years. During this time he has fulfilled many roles including Chair of the club and has been a coach for over 25 years. He has helped lots of children through local competitions, as well as many championships including Nationals and World Masters. Stewart also coached Vicki Sims, who won two silver medals as part of the 4x 100m Freestyle and Medley Relay team in the 1992 Barcelona British Paralympic Team.

Jean has played a key role in the Fareham in Bloom campaign and has been involved in the scheme for over 18 years, through both volunteering and by entering her own garden. She has successfully managed and developed the annual Gardens Open Day for more than 10 years, which has raised a substantial amount of money for charity.

Isaac was recognised for his special musical achievement on reaching the final of Britain's Got Talent in 2015. He finished fifth and has now been signed by television producer and music talent scout, Simon Cowell.

The Collingwood Cup is presented to an individual or group at HMS Collingwood who have made a significant contribution to the community. Graham won this award for his Road Safety Campaign and community engagement, as well as his continued interaction with Hampshire Constabulary. Graham also regularly instructs children, young adults and cadets to sail at the weekends.