Winners of the Citizen and Young Citizen of Honour Awards 2017 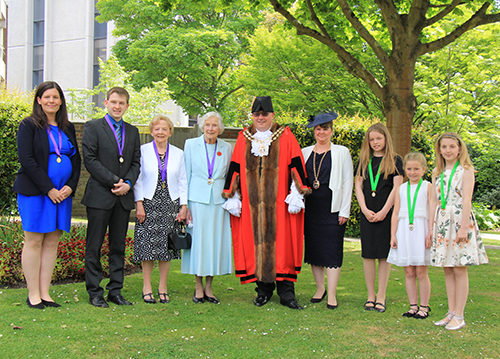 Amber's mum experienced health complications almost three years ago making Amber the primary carer for her mum. She has been praised for supporting her mum helping with household chores and the care of her younger sister. At school Amber also works to raise awareness for young carers, she has put on a stall and prepared a speech to perform for Young Carers Awareness Day.

Lucy began fundraising for Cancer Research after her friend's mum sadly passed away. She has so far raised £5,500 for the charity. Lucy has been named as an inspiration and role model to others devoting much of her time and energy into fundraising and helping others in need.

Olivia regularly attends Project at Enable Ability (PALS), a social group catering for young people with mild-moderate disabilities. She wanted to make sure the group could continue supporting other young people so independently designed and completed a mini triathlon. Her fundraising efforts achieved a total of £170.

Kerry received the largest of nominations of any previous Citizen of Honour. She can be found working as a serving police officer and devotes her spare time to helping vulnerable members of the community. She has set up and runs a popular Facebook page called Acts of Kindness which aims to help those in need.

Matthew is partially sighted and is the founder and Chairman of Fareham Musical Society's Youth Theatre. He works tirelessly, alongside his full-time job, to carry out administrative work, design sets and costumes and makes sure the theatres' performances run smoothly. He is admired by all at the youth group which is attended by more than 40 children from the local community.

Betty is a keen community volunteer and remains committed to helping others as she enters her 90th year. She has supported Naomi House and Jack's Place Hospice since before its launch in 1997. She also volunteers in charity shops in the Borough and is a longstanding member of the Solent Committee, a local fundraising group.

Gwen has volunteered with Citizens Advice Fareham for more than 27 years. She is always cheerful and is an inspiration to clients and staff at the centre. Her positive outlook helps people to feel calm and relaxed in what can often be difficult circumstances.