You are here: Home / Daedalus

Established in 1917 as a Naval Seaplane Training School, Daedalus has been part of the local communities of Fareham, Lee-on-the-Solent and Gosport for more than a century.

Although it is impossible to pick out all of the highlights in one graphic, we have picked up some of the key moments.

Since acquiring the site in 2015, the Council has held two major events at Daedalus. The first, held in 2017, marked its centenary and the Council to welcome HRH The Princess Royal to Daedalus. The second event was a two-day airshow and this formed part of the wider D-Day 75 commemoration.  As you will see, Daedalus played a crucial role in 1945.

Admiralty decode to develop the station as a long-term seaplane base.

Royal Naval Air Service becomes part of the newly formed Royal Air Force and the station has 465 people based there. It closes at the end of WW1.

Aircraft training continues throughout the 1920s.

The Fleet Air Arm transfers to Admiralty control. The Station is one of the first ex-RAF stations commissioned as one of His Majesty's ships, HMS Daealus.

WW2 begins and Daedalus becomes one of the first stations to have a hard surface runway.

825 Squadron based at Daedalus takes part in a courageous attack against two German battleships, Scharnhorst and Gniesenau. 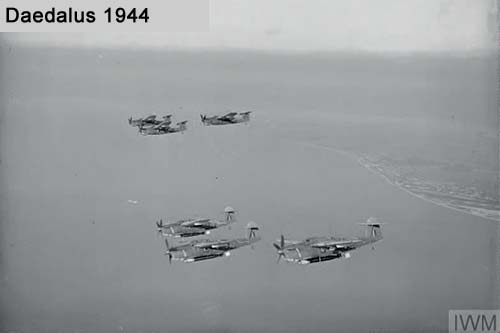 In May 1939, naval aviation responsibilities had transferred to the Navy, leading to the airfield being commissioned as Royal Naval Air Station Lee-on-Solent (HMS Daedalus). During Operation Overlord and Neptune (D-Day), Daedalus was at its busiest, providing air support to the invasion forces.

On D-Day in 1944, HMS Daedalus was a base for over 100 fighter aircraft and was the busiest airfield in the country. The RAF were joined by Canadian Typhoons and Mustangs, along with US Navy Squadron VOS-7, who used the airfield as the base for their spitfires.

The operational tasks of the aircraft consisted of spotting the fall of shell from the naval ships bombarding enemy positions in Normandy, local tactical reconnaissance in the invasion area, offensive sweeps over the beachheads looking for enemy positions to destroy, anti-submarine patrols and allied ship and air escort duties throughout the invasion.

At 0441 hours on the 6 June 1944, the first aircraft to take part in Operation Overlord from Lee-on-Solent took off towards the Normandy beachhead. A total of 435 sorties (an attack made by troops coming from a strongpoint) were carried out between dawn and dusk. This number was the largest achieved by any UK airfield and the highest of any tactical air force to date. This meant an average of three operational sorties by every pilot, each averaging about 1.5 hours over the assault area. 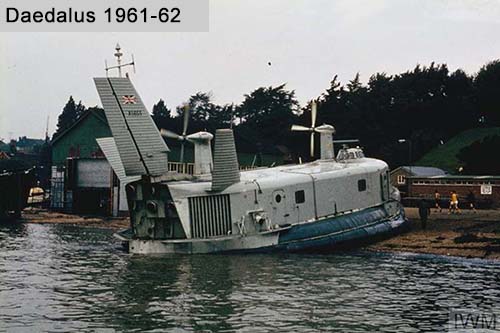 A number of squadrons based at Daedalus are disbanded or relocated.

Daedalus is the control centre for a flypast of 327 Naval aircraft for the Coronation Review viewed by Her Majesty Queen Elizabeth.

The Air Electrical School transfers to Daedalus in a bid to develop the station for technical training.

Hovercraft Trials begin, designed to test hovercraft for interservice military uses. The slipway to the sea is brought back into use to accommodate them. 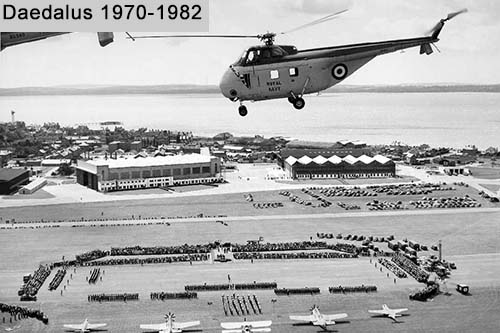 Announcement made that the Naval Hovercraft Trials Unity closes. 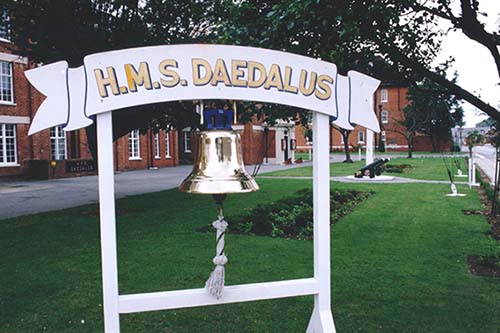 The Fleet Air Arm Search and Rescue role transfers to a civilian company operating on behalf of HM Coastguard.

Daedalus plays a major part in the 50th anniversary of D-Day. Both modern and historic aircraft, including that of Queen Elizabeth, and the personal helicopter of the President of the United States of America, Bill Clinton, land at the station.

The site transforms to the Homes and Communities Agency (HCA) and Marine Coastguard Agency (MCA). 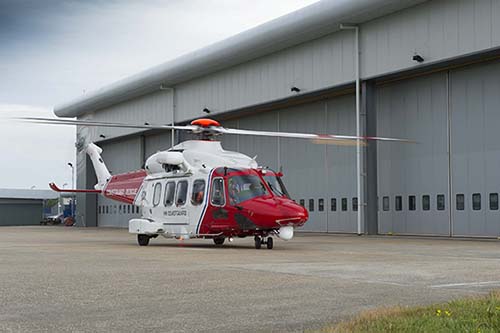 Much of the site which includes Daedalus East and Daedalus West becomes te Solent Enterprise Zone.

HCA purchases the airfield from the MCA in 2013 along with land from the MoD as part of a £1.52m investment.