Winners of the Citizen and Young Citizen of Honour Awards 2015 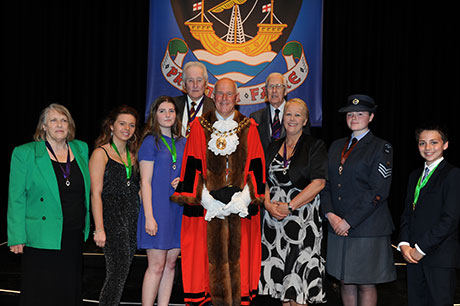 Dee has been a volunteer at Open Sight for around 25 years and has helped in various roles. She has also worked for Fareport Talking news and works very hard to help visually impaired people in Fareham.

Vic has been a member of Fareham Lions since 1971 and has been working hard as a volunteer for 44 years. He works tirelessly to help his local community and has helped in putting on various events, as well as raising thousands of pounds for charity.

Sharon works full time as the Asda Community Life Champion and, in spite of her own health and experience of cancer, she continues to raise thousands of pounds for charity.  Sharon regularly takes part in events including skydiving, abseiling and cycling. She is also due to take part in a swim from the Isle of Wight to Hill Head. On top of all of this, Sharon regularly volunteers at various events, including SNAP.

Tony receives his award for outstanding services to cricket in Fareham. He has worked with the club at Bath Lane for 53 years, including 20 years as Groundsman, and is now a senior administrator with the Hampshire Cricket League as Vice Chairman. He is a familiar face at the club and has given years of voluntary service to the community.

Tiffany tragically lost three family members in three different road traffic accidents. She raised money for charity, Brake, by taking part in a sky dive, even though she hates heights. Tiffany has not only helped her family through this difficult time, she has also been nominated for this award as a very helpful neighbour.

Charlie volunteers as a young worker at Odyssey and has supported her younger peers to get involved in various projects. She has also represented Y Services at the Hampshire County Youth Conference and regularly supports others in any way she can.

Harry's younger brother has Cerebral Palsy and attends The Rainbow Centre. Harry has raised over £1000 by taking part in a children's abseil for the Centre. He also encourages his school to help fundraise for the Centre, and has signed up to be a peer supporter at his school. Harry regularly helps his brothers and parents in any way he can.