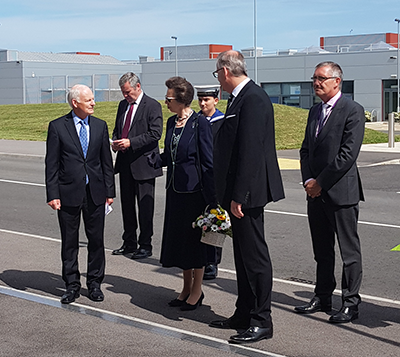 The visit was an opportunity for her Royal Highness to see the latest improvements made there by Fareham Borough Council.

Her Royal Highness commented "I hope a lot of you feel that this is something that the pioneers who came here 100 years ago, would be hugely enthralled by what many of you are doing here and to see how sophisticated all of this has become. Thank you for keeping history alive and proving that history always has a future."

Executive Leader of Fareham Borough Council, Cllr Seán Woodward, said: "It was an honour to welcome The Princess Royal to Daedalus. Her Royal Highness was able to see at first-hand the impressive developments which have taken place there since the Council took ownership in 2015. As Daedalus celebrates its 100th year it is fast becoming a premier site for aviation on the South Coast, so what better way to celebrate than with a Royal visit!"