Flying the flag at Daedalus for Armed Forces Day 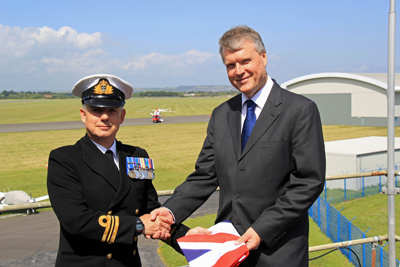 The Armed Forces Flag has been raised for the first time at Solent Airport at Daedalus.  The flag raising marks the beginning of celebrations taking place around the country ahead of Armed Forces Day which, this year, falls on Saturday 24th June.

The flag raising is another significant event for the airport which, in July 2017, celebrates 100 years of flying at the site.

The flag was raised outside the Control Tower after being presented to the Executive Leader of Fareham Borough Council, Cllr Seán Woodward, by Lieutenant Commander Tug Wilson Royal Navy, First Lieutenant from HMS Collingwood..

Cllr Seán Woodward said: "It's an honour to be part of this inaugural flag raising ceremony at Solent Airport ay Daedalus. By flying the Armed Forces Flag we acknowledge the outstanding contribution made by all of our Armed Forces - past, present and future. Daedalus has a long military history, playing its part in both the First and Second world wars, so it seems especially pertinent that we should fly the flag here in its centennial year."

Lieutenant Commander Tug Wilson said: "I'm pleased that Fareham Borough Council, along with other councils across the country, is marking Armed Forces Day in this way. To see the flag flying at Daedalus is a fitting tribute to the dedication of our armed forces personnel here in the UK and around the world."

This and previous media releases can be viewed on the Council's website: www.fareham.gov.uk/pressreleases