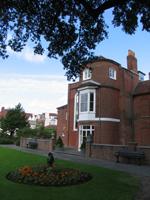 Situated at the back of Westbury Manor Museum, the period garden has plants from around the world with an array of shrubs and herbaceous plants chosen to reflect the Victorian plant collectors of the time.

Built in the 1600's, the house at Westbury Manor was extended and adapted to its present style during the late 18th and mid 19th centuries.  A private residence until 1932, it was sold to the Fareham Urban District Council to provide accommodation for employees until the Civic Offices were built in 1976.

Westbury Manor itself was renovated during the late 1980's and reopened as Fareham Borough Museum in 1990.  The building is now Grade II listed.

The garden at Westbury Manor is managed by Fareham Borough Council, with funding from Fareham and Hampshire. Funding from the Borough was made possible through the Winifred Cocks Bequest.  An active member of the Fareham Society, Winifred Cocks made provision in her will for the use and eventual sale of her own house for local museum purposes. The charitable bequest set up in her name provided funding not only for this garden, but also for the restoration and fitting out of Westbury Manor itself in 1989/90.

The shape of the garden at the back of the house has changed little.  In 1953 part of it was sold to Hampshire and Dorset Bus Company to add to the area of the 'old' bus station, which had its entrance on West Street. Development plans during the 1980's boom did not come to fruition so after the Council left, the garden area was left as a temporary car park.

Between 1778 and 1932 Westbury Manor was home to seven Admirals of the Royal Navy.  To respect this, the Victorian garden was laid out as a compose rose with the house (England) at its centre. In the south east corner of the garden there are shrubs and herbaceous perennials introduced from South East Asia, China and Japan. In the south west corner, there are plants introduced from South America and the Pacific, from New Zealand, Chile and Peru. To the west there are trees, shrubs and herbaceous perennials introduced from North America.

Westbury Manor Gardens was awarded Gold in the small parks category at the 2022 South and South-East in Bloom awards.

Cottage garden - A collection of shrubs commonly found in 'Victorian Country' gardens, with uses in the kitchen and flowers for the home - lavender, bay, sage, mallow.

Chinese border - shrubs and perennials from the Far East.

A planting plan is available for reference in the museum

Westbury Manor Museum is open 10am – 5pm Monday-Friday and 10am – 4pm Sunday.

The Victorian Garden at Westbury Manor was formally opened on 20 October 1994 by the Mayor of Fareham, Councillor Mrs Tessa Short and Mrs Gillian Drummond, Chairman of Hampshire Gardens Trust.