You are here: Home / Licensing And Inspections / Air Quality

What is the Council doing?

The news was confirmed by the Parliamentary Under Secretary of State for the Environment, Dr Thérèse Coffey MP on 19 March, and follows a consultation held by Fareham Borough Council last year on eleven proposed sustainable measures.

Evidence suggested that just one location in Fareham may exceed EU nitrogen dioxide levels by a very small amount: 0.55ug/m2 above the 40ug/m2 limit during 2020.

Only four of the eleven measures consulted on could be introduced in time to have the desired impact during 2019 and it is for these four measures that funding was requested and has now been received.

The revised taxi scheme will be delivered by Fareham Borough Council and the other three measures co-ordinated by Hampshire County Council as the Highway Authority.

Due to the declaration of the first Air Quality Management Area AQMA, an air quality action plan

(5 MB) was developed to improve air quality within a set timescale. Examples of improvement actions in an AQAP include:

The AQAP was approved by our Executive at its meeting on 8 December 2008 and an implementation group was set up. It meets four times a year to receive updates from officers from Fareham and Gosport Borough Councils and Hampshire County Council. Results from the  continuous nitrogen dioxide monitor on Gosport Road and the unit on Portland Street, Fareham are used to assess improvements in air quality. 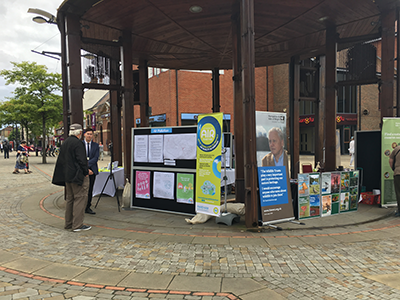 On the 20th of June 2019 Fareham Borough Council joined hundreds of other Councils and over 2000 different organisations in becoming an official Clean Air Day Supporter and held a Clean Air Day event in the town centre. The Fareham display was staffed and focussed on information about the four measures contained within the Local NO2 Plan and the wider topic of Air Quality, it is a chance to find out more about air pollution, share information with friends and colleagues, and help make the air cleaner and healthier for everyone.

To find out more about Clean Air Day and how your school, work place or community can get involved visit the Clean Air Day Website

We work closely with Hampshire County Council's Travel Planning Team to engage with schools and pupils across the Boroughs of Fareham and Gosport to promote the use of active and sustainable travel modes to reduce air pollution. We begin by providing the school with diffusion tubes to compare the levels of nitrogen dioxide associated with vehicle exhausts at different locations around their school/college grounds. A team of students is then asked to draft a clean air campaign plan that would promote active and sustainable travel and discourage idling engines, which they can use to work towards Modeshift STARS national accreditation.

So far, we have worked with the following schools:

During our Clean Air Event we displayed some of the work that was created by Hook-with-Warsash CofE Primary School for their campaign.

In 2020 we'll be looking to work with local schools and partners to raise awareness about air quality issues on Clean Air Day,18 June, including promoting the Air Your Views film competition to local secondary schools and colleges.

Following the success of the Big Green Commuter Challenge Fareham Borough Council employees took part in the SUSTRANS organised My Journey Commuter Challenge in May 2013 and 2014.  In 2014, 140 businesses and 1,650 people took part. In swapping their individual car journeys to and from work for car sharing, walking, cycling, public transport and other sustainable travel means, car commuters saved 313,373 miles and over £45,000.  Fareham came third in the large organisation category with 11% of staff saving over 4,000 car miles in their commute to work.  Staff again came third in the May 2015 Challenge. There was no Challenge in 2016.