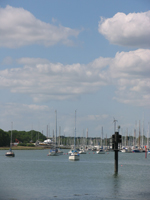 Lower Swanwick is situated at the eastern end of Bursledon Bridge, which carries the A27 across the River Hamble. Housing is mostly modern with a few older houses although a long row of low cottages can be seen near the car park on the shore.

The banks of the estuary house many small inlets and approximately half a mile along the footpath the view opens up right down to the Hamble's mouth with Southampton Water.

The area around Bursledon Brickworks and Swanwick has become particularly popular with visitors, because the river and its landmarks are where many of the scenes for the former television series 'Howards Way' were filmed.