You are here: Home / About The Council / Elections And Voting

Fareham Borough Council has completed a Community Governance Review in response to a petition from a number of Funtley residents to create a parish in Funtley.  The outcome of the review was that a Funtley Parish Council would not be established.

Two consultations were held as part of the Governance Review.  These were neither referendums nor votes, but were to help us understand the views of residents regarding the possibility of forming a Parish. The first took place last autumn, and 30% of the population of Funtley expressed support for a Parish.  We also held a Community Action Team (CAT) meeting, which was attended by 20 residents.

After reviewing all the comments we had received both for and against a Parish council our recommendation was that arrangements should stay the same, but residents should have a greater say through the work of ward councillors and the Funtley Village Society.  The response rate to this second consultation was very low and only 32 residents (5.6% of the population of Funtley) said they were against the Council's recommendation.

It is clear from the majority of responses received that there is a strong community spirit in Funtley. By participating in the consultations residents have shown that many want a greater say in local matters, particularly related to planning issues and applications, leisure and recreation facilities, and infrastructure such as traffic calming measures and street lighting. Some residents have also expressed concerns about whether they or others could afford to pay the precept on top of Council Tax.

A meeting of the Council was held on 28 July and a report on the Governance Review was presented. This summarised the results of both resident consultations and set out other considerations that Councillors would need to take into account, such as whether a decision would have a negative impact on community cohesion.  The decision also had to be representative of all people living across Funtley and not just a small subsection.

Deputations were made at the meeting by two local residents, one of whom was representing the Funtley Village Society, and there was a detailed debate amongst Councillors followed by a vote.  The outcome was that a Funtley Parish Council would not be established.  It was felt that there was not a clear and sustained level of support for a Parish as this had decreased significantly throughout the period of the Community Governance Review.

The Council also believes that the needs of the Funtley Village Society and Funtley residents, identified in the consultations, can be met by existing arrangements, without the need for imposing any additional costs on residents, some of whom may be already struggling financially.

You can read the report and decision notice

The report which will be considered at the council meeting on 28 July 2016 has now been published.

We have taken into account all of the consultation responses.   We have also considered the need to ensure that our recommendations bring about improved community engagement, more cohesive communities, better local democracy and result in more effective and convenient delivery of local services.

Taking all this into account, we want to build on the great work Funtley Village Society (FVS) has done through engaging its community, and to continue to strengthen this relationship with both FVS as a key interested party and Funtley residents in general.

Therefore, the proposed officer recommendation is not to create a Parish Council but to enable the residents of Funtley to have a greater say through the work of ward councillors and FVS, thus cementing community cohesion.

Please do let us know what you think of our recommendation by emailing us at cgr.funtley@fareham.gov.uk , writing to us, or phoning Democratic Services  on 01329 824553.

The original closing date for your comments was 6 June. However, the Funtley Village Society has asked that the deadline for comments be extended to 20 June. We have agreed to their request.  This means that the final recommendation report will now go to the 28 July meeting of the Council.

We ran a first phase consultation during the autumn of 2015, asking respondents if they wanted to:

And to provide reasons for their views.  The consultation identified that many Funtley residents want to have a greater say on local issues, particularly:

It also became clear however that some residents felt Parish Council status provided more power in determining outcomes than it actually would.  For example, a Parish Council would not be able to decide on local planning applications. It would however be a statutory consultee; however the Council already affords Funtley Village Society the same status.

All of the responses to the survey have now been analysed. You can view this presentation

(195 KB) which outlines the analysis in more detail.  You can view all of the individual reasons given in support of respondent's views in the consultation comments document

Parish Councils are separate authorities and legal entities. They run independently from County and Borough Councils but ordinarily retain close working links with them. They have a few direct or mandatory duties. Probably the most important is to set an annual precept which gives them an income from the residents in that area.

Importantly, they do have wide discretionary powers to both do and provide things in the parish but generally not without the authority of the landowner, County or Borough Council depending on the matter or function. For example, anything to do with the highway, footpaths etc would have to be agreed with the County Council. Anything that the Borough Council currently does or has responsibility for would need to be agreed with that body. Parish Councils cannot demand that they take over provision of services. Crucially there is no obligation on a landowner or either Council to delegate to or authorise any parish council, body or person to do things on its behalf.  Find out more by reading the resume of what a Parish Council may do

Find out more about Parish Councils

What is a Community Governance Review?

A community governance review enables a principal council such as Fareham Borough Council to review and put in place or make changes to community governance systems and structures e.g. by creating, merging, abolishing or changing parish or town councils in the review area.

As part of the review the Council is required to ensure that community governance within the area under review will be:

In doing so the Community Governance Review is required to take into account:

The government has emphasised that recommendations made in Community Governance Review ought to bring about improved community engagement, more cohesive communities, better local democracy and result in more effective and convenient delivery of local services.

The map below outlines the review area (click the map to enlarge it). 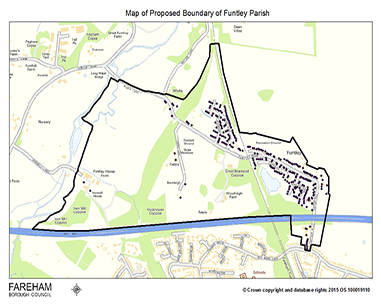 (212 KB) for the community governance review.  This outlines why we are conducting the review, what we will do as part of the review and when we will do it.

You can look at the Community Governance Timetable

(133 KB) to find out when the different parts of the review will take place and when you can get involved.  The timetable was amended in June 2016 to reflect the extended consultation period requested by Funtley Village Society.

If you have any queries regarding the review please contact Election Services by phone on 01329 236100 or email cgr.funtley@fareham.gov.uk.