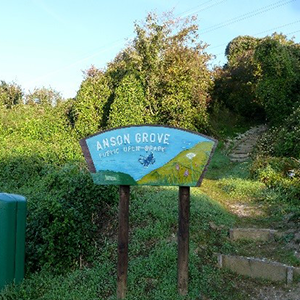 Up until 2011, the site had received little practical conservation management. For the most part, a series of access paths used by the public were maintained and dense hedges or vegetation along these paths was kept under control by contractors.

The site is dissected by the National Grid network and in 2011, a major scrub clearance exercise was undertaken in compartment 4

(147 KB). This created a meadow area which has since been cut annually to deter any further work by National Grid and to develop it for the greater good of the site.

Up until 2016, the site had not been the subject of a management plan. Between 2009 and 2016, the site had been divided into four compartments and the small meadows were cut by mechanical means on a rotation basis. In 2016 this changed and the meadows have since been cut annually. The cut organic matter is collected and made into compost heaps at appropriate points along the site.

On 29 and 30 November 2019 local conservation volunteers and residents living along The Grove planted 30 Juniper trees as part of the Woodland Trust's 'The Big Climate Fightback' campaign. Juniper is a rare species in the UK now but does prefer chalky soils and the saplings were donated by the Council. Many of the residents living in the road planted trees as part of the Woodland Trust's 'Plant a tree in '73. Some of the original trees have since died from disease caused by damage incurred by high vans snapping limbs. The saplings are doing well and the residents are committed to giving them the necessary care and attention to see them through the early years.

Following the lifting of Covid 19 restrictions in early this 2021, the Countryside Service and members of the Fareham Conservation Volunteers set about extending the wild flower meadows and joining two sections which were separated by dense scrub. In February a contractor was hired and the scrub was cut mechanically and reduced to a mulch. It was then raked up and removed by hand. The contractor returned and rotovated the fine chalk soil making it ready for sowing with a mixture of grasses and wild flower seeds. Volunteers spread the seed in early April but due to the drought we experienced through much of the spring, the seed did not germinate until early June. However, by August the area was particularly colourful with the blues and yellows of annuals which included Cornflowers and Corn Marigolds. The meadow will be cut annually during the late autumn or early winter and it is hoped that there will be a greater diversity of wild flowers growing across this area in the spring and summer of 2022. The butterflies, bees and other pollinators were enjoying the nectar and pollen up until early October.

In addition, the Countryside Service applied for and received a grant from Portsmouth Water to establish another wild flower meadow at the eastern end of the site. Work started here in June 2021. It took 14 weeks to prepare the site for planting but on the 26th November members of the Fareham Conservation Volunteers broadcast enough grass and wild flower seed to cover 900m2. Despite a very dry spring, the meadow has come to life and is now providing colour, nectar and pollen for the seasonal wildlife.

(147 KB) in early December 2021. Scrub was removed mechanically and by hand and it is now possible to see all the way through compartment 1 and 2. The exposed soil will not be reseeded until the seed within the existing soil bank germinates over the spring and summer 2022. It is anticipated that much of the unwanted scrub like dogwood (Cornus sanguinea), will need treating with herbicide to eradicate it.

In November 2021, the Council was contacted by residents living in Portchester village. They had grown a Silver Birch (Betula pendula) and a Common Beech (Fagus sylvatica) tree from seed and were looking for somewhere for them to be planted. The saplings were gratefully received and planted at Anson Grove by volunteers on 26th November. The irony is that the residents who donated the saplings lived in Anson Grove for nearly 30 years and had only moved away some three years ago. 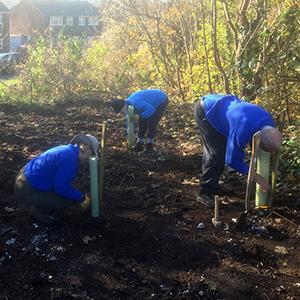 (147 KB). The survey did show a lack of activity in compartment 4

(147 KB) and research shows that because small mammals see in UV unlike us, they can see the electricity flashing along the power lines. This confuses their sense of navigation, as they use the earth's magnetic field to find their way around. Consequently, they rarely colonise areas directly under the pylons and cables which span much of compartment 4

(147 KB) both north/ south and east/ west. There are also common shrews on site but they seem to be the exception rather than the rule.

The scrub is currently too dense in the old chalk pit to carry out any field studies.

Much of the path network within the site runs parallel with Anson Grove and the M27. There are three paths which run north/ south up the hill, one of which is a public footpath. All north/ south paths connect with the longitudinal paths. This network is well used by local dog walkers and because the public footpath crosses the motorway, it does offer a good long walk.

There is no formal car park within the site or at any of the three entrances on Anson Grove. Moreover, Anson Grove is often congested as a result of residents parking along the length of the kerb. Subsequently, the site does not receive much attention from visitors outside the immediate area.

The site does offer some commanding views across Portsmouth Harbour and the Isle of Wight and two benches have been strategically placed for users to sit and enjoy the vistas. This is a site for all seasons as this slideshow shows, and the benches offer a chance to capture and enjoy these seasonal changes.

There is a public waste bin sited at two of the entrances but there are no other such facilities within the site as it is not practicable to empty them.

It was a popular site with those using scramble bikes until 2011. This activity led to damage of the meadows, the paths and some of the entrances. However, it was decided to add a locked gate at the 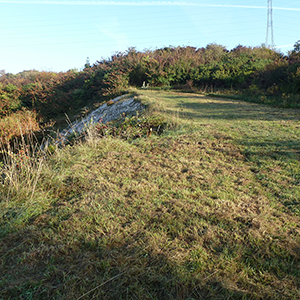 eastern entrance off Benedict Way and to replace an old wooden gate with a galvanised steel version just before the motorway bridge. This prevented further bike activity and the associated vandalism. The site is now a more peaceful and safer environment.

(275 KB) is now in place covering the period of 2018-2024. This plan outlines the management objectives for the site and gives an annual work programme which sets out the work required to achieve these objectives.

From the roundabout on the A27 in Portchester, take Station Road and drive under the railway bridge. Take the 4th turning on the right into Leith Avenue (approx. 0.25 miles). Take the first left into Pentland Rise (approx. 150m). Turn first right into Carlton Rd (approx. 150m) then turn first left into Anson Grove (50m - 75m). At the T junction, turn left and park in the lay-by at the start of the public footpath.

Please contact the Countryside Service for further information about the Common or any other countryside sites on 01329 236100 or customerservicecentre@fareham.gov.uk.

Please also contact the Countryside Service if you know of any faults, such as damaged signs, fences, fly tipping, excessive litter or obstructions on footpaths you can let us know by emailing customerservicecentre@fareham.gov.uk.