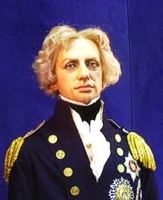 Standing on the top of Portsdown Hill, in Monument Lane, is a simple monument to Admiral Lord Horatio Nelson, Britain's most famous naval leader.

The 110 ft tribute has stood there for almost 200 years, with the foundation stone being laid in 1807, only two year's after Nelson's death. The monument was created from subscriptions raised by the navy officers and men of the Fleet who served under Admiral Lord Nelson at the Battle of Trafalgar. They wanted to honour him in celebration of that famous victory over the French on 21 October 1805.

Nelson's Column in London's Trafalgar Square was raised 30 years after the one on Portsdown Hill. Other statues are in Glasgow, Great Yarmouth, Norwich, Monmouth in Wales, Tenerife and the island of Nevis in the Caribbean.

The statue is on land owned by the Royal Artilleries and the Ministry of Defence recently commissioned renovations to the tune of £30,000. The work involved removing moss and bushes which had become embedded in the stonework and secured the joints of the structure. This facelift means that the monument has now been restored to its former glory for the millennium.

There is a tradition of laying a wreath at the Portsdown Hill statute on the anniversary of Nelson's death. The service is lead by the Nelson Society and is supported by Officers and personnel from HMS Collingwood. The monument is also used as a marker point by ships sailing in Portsmouth Harbour.