The Borough's coastline has a diverse range of landscapes and seascapes, including estuaries, salt marshes, soft cliffs and shingle beaches. It is defended along much of its length, reflecting the substantial urban population living within the coastal zone.

The historical trend in coastal defence has been for progressive construction of walls, groynes and other 'hard' structures to prevent erosion and flooding. These have caused considerable modification to natural coastal processes. The most significant trend affecting future shoreline management is sea level which is estimated to be rising at a rate of about 5-6mm per year. One of the main effects of this on defended coasts will be a loss of intertidal habitats as they are squeezed against coastal defences.

The Borough's coast is internationally important for nature conservation and this is recognized through a series of national, European and international designations. Human activity can have significant impacts on ecology. In recent years, the long term problems created by uncoordinated coastal defence policies have been acknowledged. To help redress these problems SCOPAC (Standing Conference on Problems Associated with the Coastline) was set up in 1986 to provide a forum for co-ordinating coastal defence policy and to promote sustainable shoreline management. We are an associate member. In 1993 the strategy for flood and coastal defence in England and Wales produced by MAFF (now DEFRA) set out guidelines for coastal authorities so that coast defence works should comply with the local shoreline management plan. This Borough is covered by the North Solent Shoreline Management Plan (2010)

Land owners are responsible for protecting their property from erosion and flooding but must act within applicable statutory planning and other legislation (private defences are unlikely to be eligible for public funds). The Environment Agency has powers under the Land Drainage Act 1991, Water Resources Act 1991 and byelaws for Sea Defence. The Environment Agency's consent is needed for any of these activities in a coastal zone:

*  Main river would include Portsmouth Harbour and rivers including the Hamble, Meon and Wallington.
Under the Coastal Protection Act, we have powers to protect land from erosion or encroachment by the sea. We would need consent from the Environment Agency and Marine Management Organisation (MMO) for any private or public defence activities including:

In addition, local authority planning consent is needed for any development, to low water mark, as defined within section 55 of Town and Country Planning Act 1990 including change of use, engineering operations, building works etc.

Other marine consents that you may need to consider when undertaking activities in the coastal zone (below MHWS) are:

Fareham Borough Council and the Environment Agency have permissive power for sea defence and coast protection under these acts:

In general, we and the Environment Agency will only act if there is an economic benefit, an appropriate engineering solution is achievable and environmental legislation is not contravened.

is the Government department with overall policy responsibility for flood defence and coast protection in England. One of its main aims, by helping and encouraging the building of defences, is to prevent flooding and coastal erosion.

The innovative initiative was driven forward by a need for coastal management that recognises coastal flooding and erosion risk impacts are not exclusive to Local Authority boundaries.

The overarching vision of the ESCP initiative is to reduce the risk of coastal flooding and erosion to people, the developed and natural environment by encouraging the provision of technically, environmentally and economically sustainable coastal defence and protection measures. 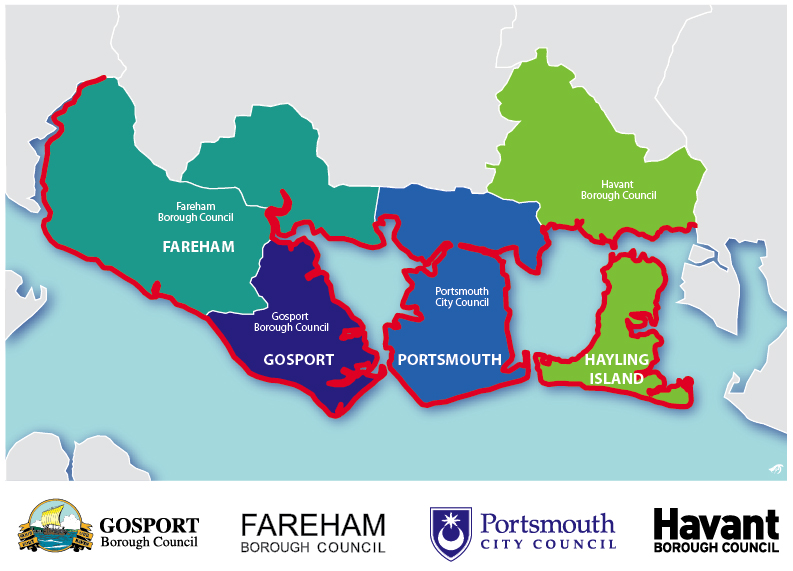 To learn more about the work we undertake, our key projects and our latest news  please visit our new ESCP website - http://www.escp.org.uk

from the ESCP about projects across the Borough of Fareham.

Defence strategies consider work on the coast and the wider implications to sediment processes and the environment. They look at schemes in greater detail then shoreline management plans and provide a foundation for funding applications to central Government for capital schemes.

(1 MB) but the strategy is in the final stages and nearing completion.

Mouchel Parkman has been commissioned by a partnership of Southampton City Council, Eastleigh Borough Council and Fareham Borough Council to develop a 'Coastal defence strategy'

for the sustainable management of coastal defences. The study front includes the east bank of the River Itchen as far upstream as Woodmill, the Weston, Netley and Hamble Le Rice frontage and both banks of the River Hamble as far upstream as the Bursledon railway bridge. The strategy has now been accepted by the Environment Agency.

We are working with the Havant, Portsmouth and Gosport Coastal Partnership to develop a coastal defence strategy for the majority of Fareham's coastline. Funding has been granted by the Environment Agency and work will begin in late 2011. This strategy will inform future defence schemes on Fareham's open Coast and Harbour coastline.