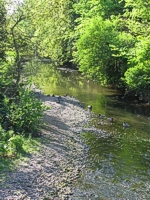 This ancient suburb is to the east of Fareham, just over the river that carries its name. It was the first fording place on the river that rises in the South Downs and meanders down to empty into the upper reaches of Fareham Creek. The discovery of flint implements in the area is thought to be evidence that there was a settlement on the river banks as far back as pre-historic times.

A large, high quality tannery which was first set up in the 17th century. The hides and bark used in the tannery and the finished products were carried by sea via Fareham Quays. With the coming of the railways, cartloads of hides and bark travelling between the railway station and tannery became a common sight in the town. The tannery employed some three dozen men and was in operation right up to the First World War. The Wallington Brewery which was north of the village and began operating in the early 19th century. It produced popular ale for more than 100 years.

Today Wallington is ringed with modern roads and industrial estates. At its highest point is the remains of Fort Wallington (a Palmerston fort, now an industrial estate). In 1978 the bridge was to be demolished as it was seen as a cause of flooding. A group of local residents fought this. A new flood prevention scheme was introduced and the bridge and buildings around it survived.