You are here: Home / Licensing And Inspections / Air Quality

We have more than 40 permanent nitrogen dioxide monitoring sites throughout the Borough.

The survey sites include facade and kerbside sites which reflect the maximum concentration of nitrogen dioxide to which people may be exposed.

We monitor nitrogen dioxide manually using more than 40 passive diffusion tubes which can be fixed to lamp posts, soil and vent pipes. The tubes are left in place for a month, collected and analysed at an accredited laboratory.

In June 2008, we installed a continuous nitrogen dioxide monitor in the Gosport Road air quality management area. The automatic monitor was funded for three years by contributions from Hampshire County Council and DEFRA. 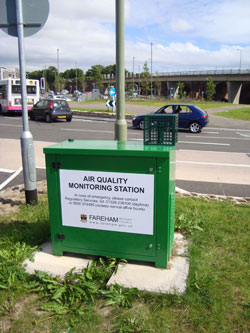 A new automatic monitor was installed in Portland Street, Fareham in April 2012. It was funded by a planning agreement with the developer of the food retail store at Quay Street. The monitor will be used with the results from the diffusion tubes on homes in Portland Street to assess the impact of the Quay Street "throughabout" that takes northbound traffic from the A32 onto the A27 Eastern Way and the M27 without passing close to homes on Portland Street.

The Tichborne Way AQMS (air quality monitoring system) continuously monitors levels of oxides of nitrogen (NO,NO2) and small particles (PM10). Particulate matter such as PM10 & PM2.5 is defined as the fraction of particles with an aerodynamic diameter smaller than respectively 10 & 2.5 µm (for your information: 1 µm = 1 millionth of a meter or 1 thousandth of a millimetre). In comparison, the average diameter of a human hair equals 50-70 µm. It located alongside the main A32 between Gosport & Fareham, which is the principle road into Gosport.

The automatic monitors provide nitrogen dioxide results based on real time data which has not been manually assessed or validated. You can see more for the Gosport Road, Portland Street and Tichborne Way sites at the links below:

Results are used with the diffusion tube results in air quality review and assessment reports.