You are here: Home / Licensing And Inspections / Noise Nuisance

Fireworks are widely used at public and private celebrations and traditional events. While they can add excitement, they can also frighten and disturb people and animals, cause annoyance, damage and impact on air quality.

Fireworks can frighten people and animals, particularly children and the elderly. Farm animals have been scared to death and startled animals have been injured, killed and caused accidents when bolting. Disturbing domestic pets can also be dangerous as panicked pets can be aggressive vicious and destructive. 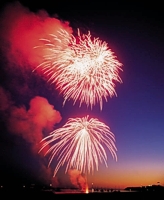 Fireworks emit light, heat and sound energy along with carbon dioxide and other gases and residues. Exact emissions will depend on the firework but as gunpowder is a main component, sulphur compounds are emitted, along with small amounts of particulates, metal oxides and organic compounds (including minute amounts of poly cyclic aromatic hydrocarbons, dioxins and furans). On and around Bonfire Night (5 November) there is often a noticeable increase in pollution.  Approximately 14% of UK dioxin emissions are produced around this date - most from bonfires as well as fireworks. Research suggests that deposits of pollutants from fireworks do not pose a risk to soil or water.

Fireworks are explosives and must be used with caution. Every year, people are treated for firework injuries.  For information on firework safety contact the Department of Trade and Industry

What is the law on the supply of fireworks?

The sale of fireworks to anyone under 18 is banned and the sale of caps, cracker snaps and party poppers is illegal to anyone under 16. The supply of bangers, mini rockets, fireworks that fly erratically (squibs, helicopters etc) ariel shells, maroons, mortars and some large powerful display fireworks are banned from supply to the public. These regulations are enforced by local authorities. Suppliers/shopkeepers in breach face a fine of up to £5000 and/or six months in prison. The Fireworks Regulations 2004

prohibit the supply of fireworks louder than 120 decibels. The sale of fireworks to the public is prohibited, except from licensed traders. The Fireworks Regulations 2004

Under the Control of Explosives Regulations 1991

it is an offence to keep fireworks (except those for private use) on premises not registered for this purpose. Individuals can store fireworks for private use for up to 14 days in a safe place.

What laws cover nuisance and danger caused by fireworks?

If we judge noise from fireworks to be a statutory nuisance under the Environmental Protection Act 1990 we can issue an abatement notice. However, as firework noise is short lived, in practice it can prove difficult to locate the source. Under the Noise Act 1996

we have powers to issue a fixed penalty notice if there is excessive noise from places (including gardens) between 11pm and 7am although we have not formally adopted that power. Under the Anti-social behaviour, Crime and Policing Act 2014

we can issue a community protection notice to an individual aged 16 or over where their conduct is deemed to be unreasonable and is having a detrimental effect on the quality of life of those in the locality, requiring them to stop. It is an offence not to comply with the notice.

Under the Protection of Animals Act 1911 it is an offence to cause unnecessary suffering to animals. A penalty of up to £5,000 and/or six months in prison is enforceable by police, trading standards or the RSPCA.

When can I use fireworks?

prohibit anyone under 18 from possessing fireworks and anyone except professionals from having display fireworks. They prohibit use of fireworks at night (11pm - 7am) in England and Wales, with extensions:

These regulations are enforced by the police. There is a penalty of up to £5,000 or six months in prison for breach of the curfew.

Fireworks can add excitement and glamour to celebrations and many people enjoy them. They don't have to be ear splitting to be fun. We can enjoy them in safety, without annoying neighbours and upsetting their pets, livestock or wildlife. If you have your own firework display, remember that too much noise can frighten people and animals and fireworks cause smoke and pollution. Follow these simple tips to reduce the risk of nuisance:

These organisations offer a variety of advice:

- advice on fireworks and animals