Striking Daedalus sculpture will be landmark for new open space 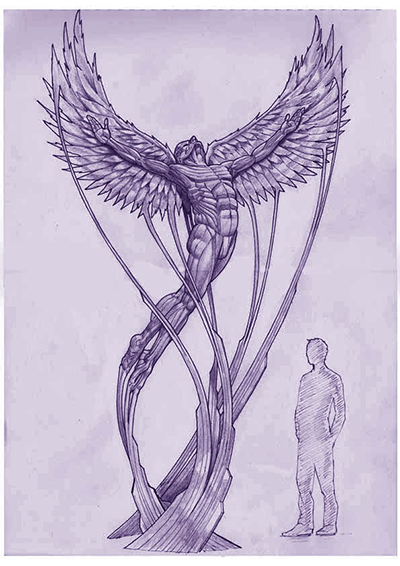 A striking image of the mythical figure, Daedalus, is set to be a landmark sculpture at Daedalus Common once it gets final sign off from the Executive. Thousands of people voted from a shortlist of five designs which was drawn up by the Council from a total of sixteen designs submitted. The figure of Daedalus took almost 50% of the votes and more than twice as many as the design that came second.

Daedalus Common, set to open in spring 2020, will be a new area of public open space, running alongside Gosport Road. The sculpture is intended to provide a striking focal point for the site.

Portsmouth-based blacksmith, Peter Clutterbuck, who specialises in large-scale iron artwork, will create the piece which has been designed for him by artisan blacksmith Nigel Searle. The inspiration for the sculpture comes from Daedalus himself taking flight, inspiring hope and achievement as well as the joy of discovery. You can read the artist's statement in full.

The sculpture will stand up to 8m high and is being paid for by National Grid, who are building a new electricity interconnector, known as IFA2, on the site.

The inspiration for the sculpture comes from Daedalus himself.

Daedalus made wings for his son, Icarus, and himself so that he could escape the island of Crete, where he was being held captive to prevent him from revealing the secrets of the labyrinth that he had designed.

As we know, the ill-fated Icarus flew too close to the sun, fell into the sea and drowned, but Daedalus flew to safety.

Daedalus was grief stricken at the loss if his son, but the goddess Athena was impressed by his ingenuity and courage and gave him real wings with the power of flight.

The sculpture represents Daedalus taking flight for the first time.

Daedalus leaps into the air and spreads his wings, looking toward the sky with his hands open, as if embracing the joy of his new found ability.

The figure itself is constructed to represent a realistic figure, with enhanced musculature, reminiscent of classic sculpture but with an abstract appearance when viewed closely.

As Daedalus spirals upward, his path is traced by fluid lines, their gentle curves suggesting a measured, joyful take off, rather than a hurried, aggressive one, but these elegant lines serve another purpose; they support the figure and bind

it to the ground, reminding us that man will never possess the power of flight alone. Their minimalist design is in complete contrast to the figure, suggesting that through technology, man can be elevated to the skies, and the mixture of classical and modern is intended to represent the history of the area.

The sculpture will inspire hope and achievement as well as the joy of discovery.

Its intriguing design will demand a closer inspection when viewed, at a distance, from its elevated position.

The entire piece will be treated with marine grade galvanising, which will protect the metal from rusting. In time, the sculpture will weather to a mid-grey.