This is a busy shopping centre but the frontage was in poor condition. The final scheme is the result of a considerable amount of public consultation in December 2003. This included a visit to every shop in the Shopping Centre to deliver a leaflet and poster advertising the public exhibition. An illustrated presentation of the suggested improvements was given at Henry Cort Community College. 130 people visited the public exhibition and a detailed, illustrated report on the scheme and exhibition was published in 'The News' on 22 December 2003.

There was general support for some improvement. Most people preferred an option with just a few trees. Some of the shopkeepers understandably did not want the shops 'hidden' behind trees. However many people said that they did want to see some trees and a number said that they were disappointed when trees had been removed in the past.  The general preference was for improved paving and site furniture with some trees and shrubs and some coloured railings, but not long lengths of railing which would prevent pedestrian movement in and out of the shopping centre. The general verbal preference was to concentrate improvements along the Highlands Road frontage. A number of people felt that new signs would help to establish a stronger identity for the area and one or two people suggested the name be shortened to 'Highlands' with a logo to reinforce local identity. A group of Henry Cort students prepared designs for a suitable logo as a small competition and the 'tree and sun' logo preferred by the shopkeepers was used for new signs placed in the shrub planting at the entrances to the shopping centre. 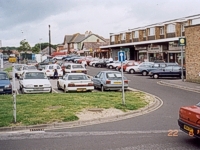 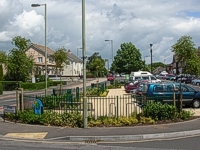